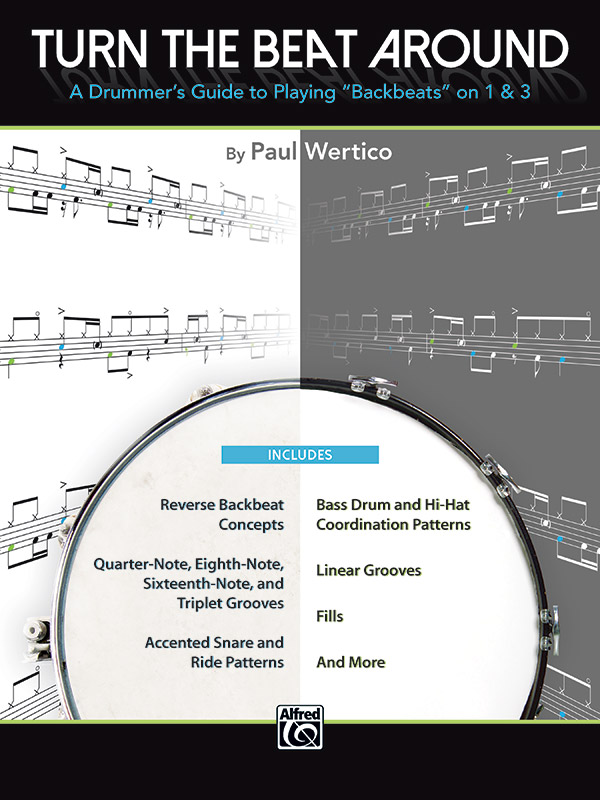 Alfred Music, the leading publisher in music education since 1922, announces the release of Paul Wertico’s Turn the Beat Around, A Drummer’s Guide to Playing “Backbeats” on 1 & 3.

Turn the Beat Around breaks decades-old routine by examining “backbeats” in a whole new light, asking the questions: “Why are backbeats always played on beats 2 & 4?” and “What about playing them on beats 1 & 3?” By delving into this inquiry, Paul Wertico provides drummers with innovative ways of expanding groove vocabulary, solidifying time, and mastering coordination and limb independence. Wertico has even coined a new word for these types of reversed beats—frontbeats.

Hailed in the press as “One of the most versatile and musical drummers in music today,” Paul Wertico gained worldwide recognition as a member of the Pat Metheny Group from 1983 to 2001. During his tenure with Metheny, Wertico played on ten recordings and four videos, appeared on numerous television shows, and frequently toured around the world. He also won seven Grammy Awards (for “Best Jazz Fusion Performance,” “Best Contemporary Jazz Performance,” and “Best Rock Instrumental Performance”), magazine polls, and received several gold records.

Turn the Beat Around is available for $19.99 at music retail stores, online retailers, and alfred.com.