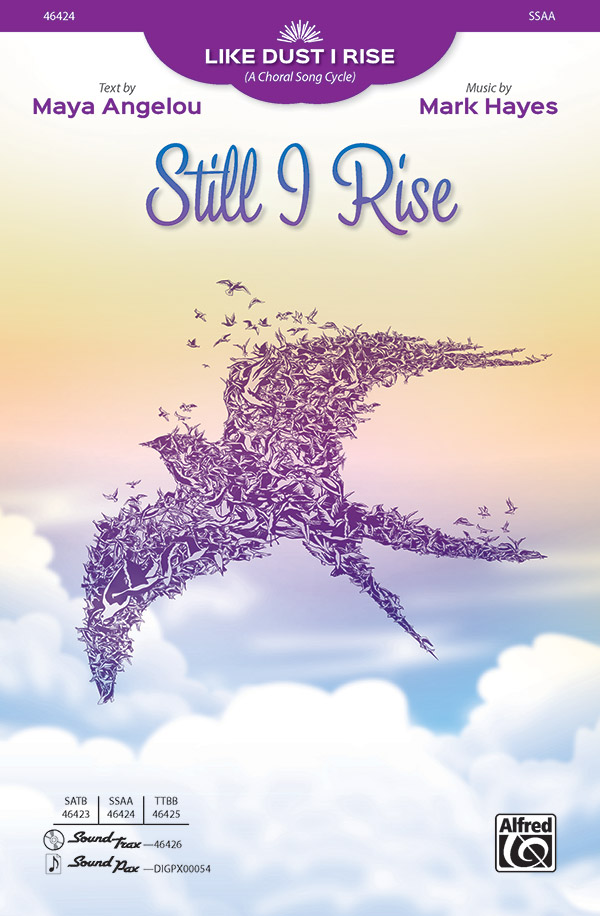 Alfred Music, the leading publisher in music education since 1922, is honored to exclusively release Like Dust I Rise (A Choral Song Cycle). The indelible words of American poet and civil rights activist Maya Angelou are masterfully set by Mark Hayes to create an inspiring choral work of great depth. Each piece is arranged for SATB, SSAA, and TTBB and can be performed a la carte or as a 12 minute, 4-song cycle. SoundTrax CD and SoundPax are also available for each.

Maya Angelou’s poem "On the Pulse of Morning" won a GRAMMY® Award for “Best Spoken Word” in 1994. Mark Hayes opens the piece with a resounding choral fanfare before presenting the hope-filled second half of the poem with rhythmic exuberance.

"Caged Bird" is a folk-like setting of Angelou’s empowering poem. Hayes chooses a minor key with plenty of harmonic tension and a walking tempo alluding to the footsteps of those who have come before. The final Picardy third is the ultimate symbol of freedom.

"Equality" is written in the contemporary, gospel-style serving as a choral anthem for equal rights which includes a confident solo voice to deliver the determined message. If performing as a set, an alternate ending segues into the closing movement of “Like Dust I Rise.” When the piece is performed separately, Hayes has written an upward modulation that propels us to the final, most spirited refrain.

"Still I Rise" is one of Angelou’s most popular poems about triumph over adversity. This vivid setting by Mark Hayes features a bright shuffle tempo and bluesy piano riffs to perfectly embody Angelou’s strength, courage, and determination to rise above. One of the most uplifting choral selections of our time!

"On the Pulse of Morning," "Caged Bird," "Equality," and "Still I Rise" are all available in SATB, SSAA, and TTBB voicings, and with corresponding SoundTrax CDs and SoundPax at music retail stores, online retailers, and alfred.com.