Intonation: A Game Changer for Achieving a Mature Ensemble Sound 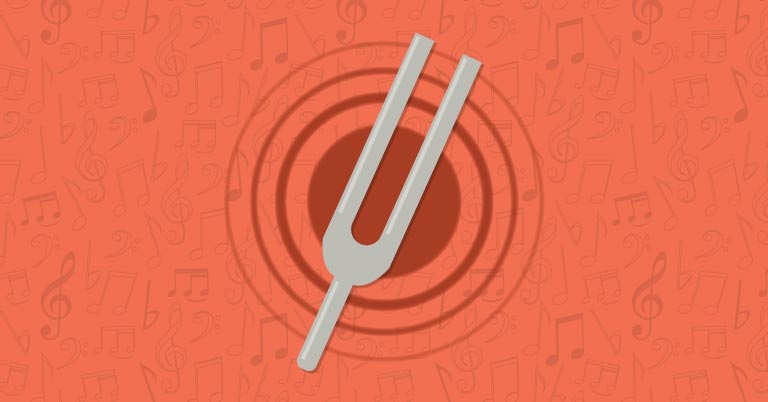 There are many factors that contribute to a mature ensemble sound. In my last article, I addressed the importance of working on longer, more musical phrasing. Here I’d like to discuss another “game changer” that sets apart fine bands at any level: playing in tune. While phrasing is a relatively straightforward concept to address, intonation can be tough for young players to grasp and is an ongoing process. Spending even a little time regularly working on individual and ensemble tuning with your students will lead to noticeable improvements in your ensemble’s sound! Here are some practical, effective ways students young and old can improve in the area of playing in tune.

The concept of intonation should be introduced in small doses as soon as students can sustain a stable tone on their instrument. At this early stage, “planting seeds” is called for rather than lengthy explanations. A simple/quick way to plant seeds of intonation understanding is for you and a proficient student to:

In discussing what students are hearing, use vocabulary that conveys what you mean by flat—“low,” “sour,” “weak”—or sharp —“high,” “edgy,” “shrill.” I like to describe the dissonance of playing out of tune as instrumentalists “having a musical argument.”

A similar demonstration you can use once you introduce long tones (one of my favorite warm up activities) goes like this:

Even a quick ensemble tuning, directing students with noticeable intonation issues to adjust their instrument accordingly, plants seeds as well. In doing so, students:

A picture is worth a thousand words; using technology with visual feedback, such as the tuner built into SmartMusic or mobile device apps, can be a big help. My favorite tuning apps are the simple, straightforward Cleartune; the graphically hip Tonal Energy Tuner (emoji graphics, and easy to toggle keys for transposing instruments); and Bandmates, which (along with flat/sharp feedback) allows users to view notes played on a staff. During the “planting seeds” stage, I allow students to see the visual feedback and discuss with them the adjustment that needs to be made. After using one of these graphic tuners, students never stop asking to tune with it in lessons! If your school allows it, students should be encouraged to download and use their own tuner app in when rehearsing. 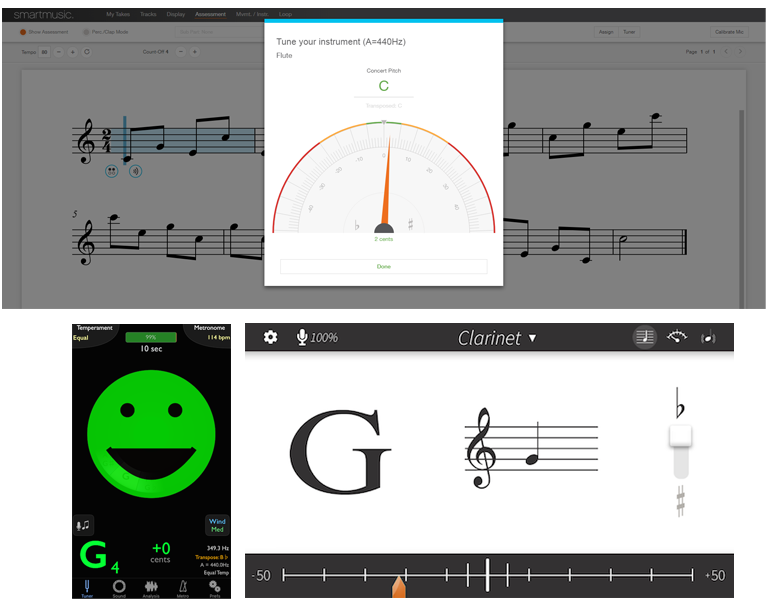 Another great app for helping students discern tuning differences is the APS Tuning Trainer for mobile devices. The app plays two tones one after the other—a reference pitch and a “determinant” pitch which will randomly be in tune, sharp, or flat. The user can set how many cents of “pitch variance” the determinant pitch will sound. A large pitch variance of, say 35-40 cents, makes it easy to hear intonation differences. Once students master such coarse differences, teachers can decrease the pitch variance.

Once the seeds for the concept of intonation and the steps for tuning one’s instrument have been planted, it’s time to let students try making decisions for themselves. When tuning, ask student who can hear that they are out of tune to make their best guess and adjust. Tell students who are apprehensive about discerning intonation, “The worst that can happen if you choose wrong is you’ll sound worse! Then it will be obvious you should adjust in the opposite direction.”

Of course, tuning and playing in tune are two different things! To instill a sense of playing with a centered pitch, I recommend having students play along with a reference sound (teacher, recording, SmartMusic accompaniment, piano, etc.) and the use of interval warm-ups (such as the “Expanding Intervals” exercises in the Sound Innovations Ensemble Development books). With both, repetition is key for students to form a conception of what sound is correct and how to adjust to achieve it. After an interval warm-up becomes routine, try holding certain notes as fermatas to allow students to remove tuning tension and center their pitch. Older students can apply here what they have learned about their instruments’ specific tuning tendencies (i.e. flutes rolling mouthpiece in/out, trumpets using 3rd valve slide, etc.).

One of my favorite ways to tune a section or the entire band is to tune successive, adjacent pairs of players. Begin by conducting a general tuning of the ensemble to get everyone in the ballpark. Next, have one player (I like to use the lowest sounding wind), who we’ll call Player 1, begin by playing a tuning note of your choice. After a brief time, direct player Player 2 to join Player 1 (same pitch or the octave equivalent). Player 2 compares his sound to Player 1’s and makes a determination (sharp, flat, or in tune). Under these circumstances it will be very easy to hear, but if needed the director can offer feedback. As Player 1 still sounds the tuning note, Player 2 adjusts (if necessary) until he is in tune. At that point Player 1 drops out and the next player in line, Player 3, joins Player 2. It is now Player 3 who makes a determination and adjusts if necessary. Once stable, Player 2 drops out and the next player in line, Player 4, joins in. And so on, and so on. Some bands who tune to concert F refer to this procedure as “F Around the Bandroom.”

Some great material for employing this approach can be found in the “Passing the Tonic” exercises in all three levels of the Sound Innovations Ensemble Development books. In each, as a note is passed from section to section around the ensemble, players must listen and work to match intonation and other qualities.

For an ensemble familiar with this routine, it takes about five or so minutes to tune. Due to time constraints, you may want to tune only a section or two this way in some rehearsals.

A guitarist typically tunes each string individually, then sounds a chord to hear how the strings ring and resonate together. When heard in a harmonic context, individual string tunings may need to be refined further. I recommend tuning an ensemble similarly: first tune individual players (the older the player, the greater the player’s responsibility for tuning him/herself), then have the a section or the entire ensemble sustain a vertical sonority together so you can listen for tuning tensions that still have not been resolved. The opening or closing chords of most pieces you might be rehearsing, or the work’s climax moment, serve perfectly for this. Stopping on various chords of a chorale (such as those found throughout the Sound Innovations Ensemble Development books) allows for this as well. For more mature ensembles, non-triadic vertical note aggregates (i.e. quartal, quintal, poly chords) can be used. The key is to listen discerningly and make adjustments so the harmony rings true.

Like many educators around the country each school year, I must craft a “Student Learning Objective” as part of my teacher evaluation process. SLO’s are learning goals for students against which an educator’s efficacy can be measured. Last year, my colleagues and I chose an intonation awareness SLO. Our goal was simply for second year players to know how to interpret feedback from a tuning app, and know what adjustment to make on their instrument based on that feedback. Although we did encourage students to make tuning decisions, our SLO didn’t require students to specifically recognize whether they were sharp, flat, or in tune. Despite such a general “awareness” approach, I was pleased with the results. Near the end of the year, after working periodically on tuning awareness all year, we held our annual district wide 5th grade concert. My wife, a fine flutist with experience teaching young bands, attends this concert each year and always gives me candid feedback about how we did. I did not share with her that tuning had been an emphasis during the year. After the concert I asked her for her impressions. The first thing she said was, “I thought the band sounded more in tune this year than in the past.”

Each year I am honored to be asked to guest conduct various honor bands. When I ask a student at an elementary or intermediate festival to make a tuning adjustment, it is not uncommon for younger players to share that their tuning slide is stuck or that they’ve never (or rarely) used it! I realize there are many worthwhile ways to spend the precious, limited time we have with students. In many cases with younger players, we’re tickled if students can just play correct notes and rhythms! Nonetheless, if you can plant seeds of tuning awareness and understanding along the way, your band’s sound will grow to be more attractive and pleasing to all who hear. 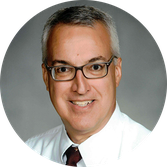 Dr. Scott Watson has taught instrumental and elective music in the Parkland School District for 35 years and serves as adjunct professor for Cairn University, among others. He is a frequently commissioned composer with approximately 100 published pieces for band and strings, and is an active clinician and guest conductor.