Hamilton Hacks: Simplifying the Choral Medley for Your Singers 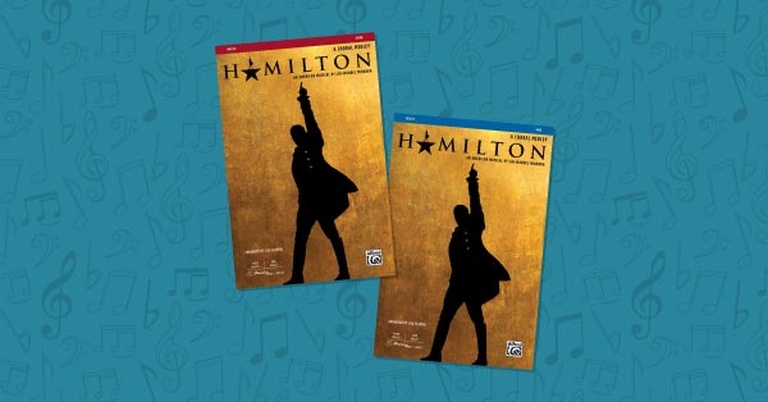 As an arranger, I love the puzzle of taking an amazing Broadway show like Hamilton and translating it into a musical experience that instills a passion for the arts in your performers, helps them grow in ways they never thought possible, and frankly, is a joy for you, the director, to teach.

When I was asked to create the Hamilton medley, the only answer was, “YES!” But what a challenge! As I combed through the immense amount of amazing music, I felt a great responsibility to craft an arrangement that would reach as many voices as possible, from the highly-trained choral singer to the first-timer; from adult and college choirs all the way to young performers. The task felt daunting, but I thought about your students/singers at every step of the way.

If the multiple ensemble sections challenge your vocalists or you don’t have enough singers to split into groups, thin it out. 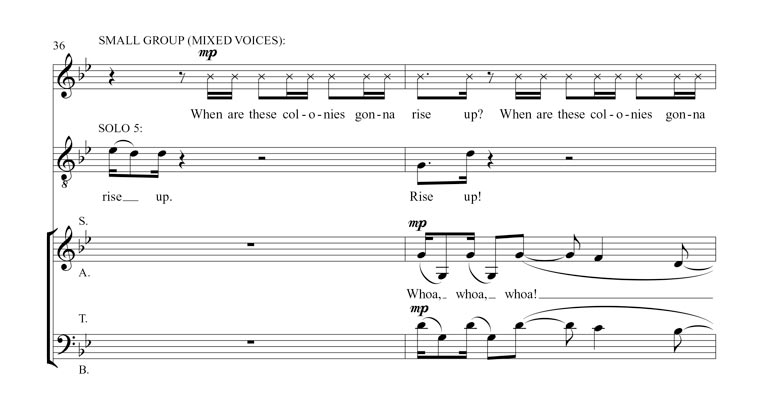 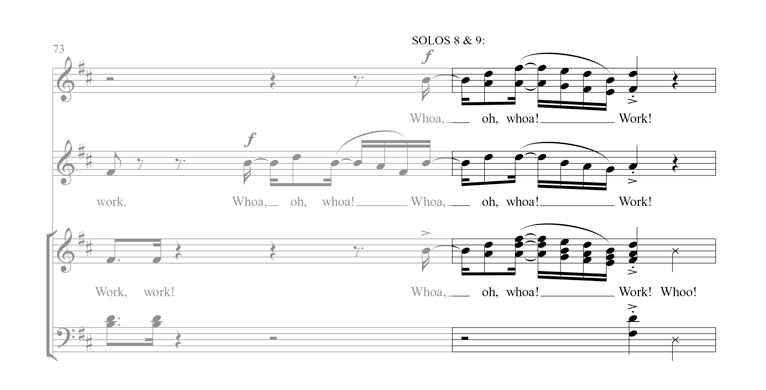 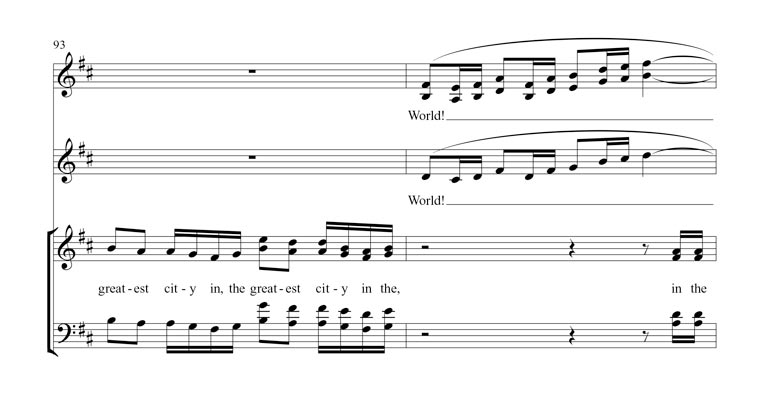 “The Room Where It Happens”

One of the biggest challenges of crafting Hamilton: A Choral Medley was what to leave out. I decided to give you as much of the music as I could, yet craft the arrangement in a way that sections could be taken out without hurting the flow of the arrangement. If you don’t have enough rehearsal time or your young singers don’t have the stamina, shorten and/or simplify the arrangement.

For Middle School choirs, these two hacks are especially valuable:

Finally, some pointers on how to teach spoken word/rap.

How to Conquer the Spoken Word/Rap

Using measures 157–164 as an example, here’s how I coached the rap with my students.

First, I had the soloist identify which syllables he/she spoke on the downbeat, then mark the syllable with an accent (or circle the syllable).

Then I had the soloist identify the syllable on next strong beat (3), and again, mark that syllable.

If there is a rest on the downbeat, so that the rap starts on a syncopated upbeat, I had the performer clap or stomp on the downbeat. (Try it! It works!)

After all the strong beats/syllables were identified, we put a metronome on under tempo (q = 58). The soloist would practice landing those syllables on those strong beats. None of the other words or rhythms mattered at that point. Even if they muttered a few words (“blah, blah, blah, DEATH so much it feels, blah, blah, a MEM-o-ry…" ) it was fine! The secret to performing spoken word, if you know where the big beats are, the rest of the phrase generally takes care of itself.

This practice approach ingrained the feel of the phrase into their mouths, bodies, and brains. And if somehow they got off the rap rhythm, their bodies knew instinctively how to turn the phrase around and get back on track.

Regarding diction in spoken word, stay tuned to Alfred Music for my next article on diction exercises in a follow-up post!

Thank you sincerely to all who have sung Hamilton: A Choral Medley! I thrill seeing your YouTube video posts and watching your students performing my arrangements with such passion! It always makes my day and gives my art meaning! If you use one of my hacks, please let me know if it was successful—or not—in the comments below. I love learning and am always seeking to stretch my craft to make better arrangements for your singers.

And for those of you who thought it not possible to perform Hamilton: A Choral Medley with your ensemble, I hope these ideas have inspired you to give it a try. Happy Hacking!

Have you tried spoken word with your choir(s)? What "hacks" have you used to help your singers be successful? Share your experiences with us in the comments below!

Lisa DeSpain is a jazz composer for opera and musical theatre. Her operatic works include That Hell-Bound Train and No Ladies In the Lady's Book. Her musical theatre works include Storyville and Like I Care!, a middle school musical. Lisa is a Professor of Music at LaGuardia Community College.