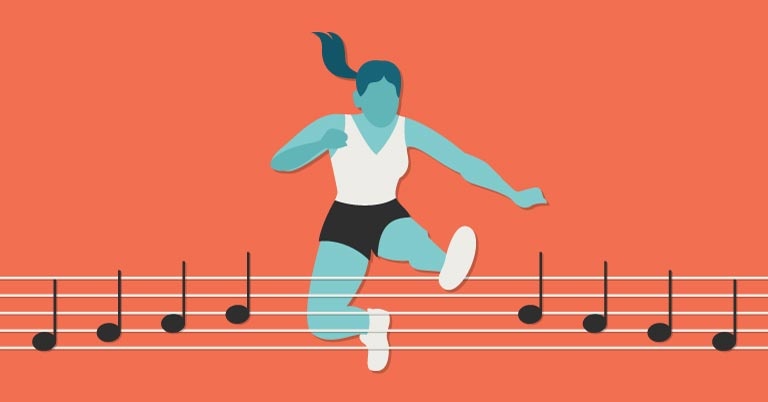 Teaching the upper octave of a 3-octave scale and arpeggio routine to a heterogeneous string class can benefit string students in developing a focused tone and lead to improved intonation in all registers. For the right hand and bow arm, the process of playing in upper positions necessitates that students manipulate the variables of sound—bow lanes, weight, and speed—to produce a clear tone quality. Too often in school ensembles, each ascending shift seems to shrink the bow into ever decreasing lengths until the student has only the upper third of the stick left. An experienced high school string teacher once remarked to me, “A lot of the kids, you know, kind of get stuck in the upper half playing light and fuzzy.” Similarly, a studio teacher shared that she encourages students to “hear below the ‘string veneer sound’ in a pitch,” adding: “When they hear below the surface of the overall pitch, tone and intonation greatly improve.” In the scale layout for Sound Innovations: Sound Development for Advanced String Orchestra, Bob Phillips and I identified several everyday hurdles to teaching 3-octave scales in heterogeneous string classes. Here are some common hurdles, as well as ways in which you can overcome these hurdles with your students.

1. Not all of the students are ready for the upper octave.

School orchestra string sections typically represent a range of student abilities, complicating the process of instruction. While scales provide a straightforward means to develop technique, the top octave of a 3-octave scale requires a readiness to learn that may fall outside the ability of some students in the class. To engage all learners, try reformatting the scale by repeating the tonic at each octave. Repeating the tonic will give students a solid new beginning and offer a clear starting point, making it easier for less advanced students to repeat lower octaves as needed. Adding rehearsal letters can also make starting points clearer for students. When all students participate, all students can learn.

2. Students get lost during 3-octave scales.

3. Students rush through scales; the longer they play, the faster they get.

Performing three-octave scales with rhythmic control can challenge even the most advanced students, including those auditioning for honor orchestra or all-state placement. In a historic masterclass video series filmed at Meadowmount, renowned violin pedagogue Ivan Galamian steadies his pupil’s tempo on a 3-octave scale routine by finger snapping and knee patting macrobeats, until he reaches for his cigarette lighter and starts banging it on an end table as a metronome: “The idea is to play absolutely even in time,” he clarifies (his young pupil, Carlos Spierer, goes on to have a career as an internationally acclaimed conductor).

Researchers suggest that the urge to rush may relate to a student’s sense of personal tempo, and playing slower goes against these basic instincts. If students struggle with rushing, teachers may need to alter pedagogical strategies to facilitate improvement. Certainly, a metronome can help students keep a steady tempo (though please, do not use a cigarette lighter!). Less-common strategies, though, such as rhythmic augmentation, may also offer solutions to rushing. Specific to 3-octave scales, try having students play the top octave in half notes (rhythmic augmentation) to provide visual clarity in the least familiar register, take full-length bows, and subsequently improve their tone quality through varying bow lanes, weight, and speed in upper positions.

The following cello scale layout illustrates these ideas: (1) repeating the tonic, (2) adding rehearsal letters, (3) providing marked fingerings with named positions, and (4) employing rhythmic augmentation (half notes) on the highest octave. Try these ideas with your students to improve their performance. 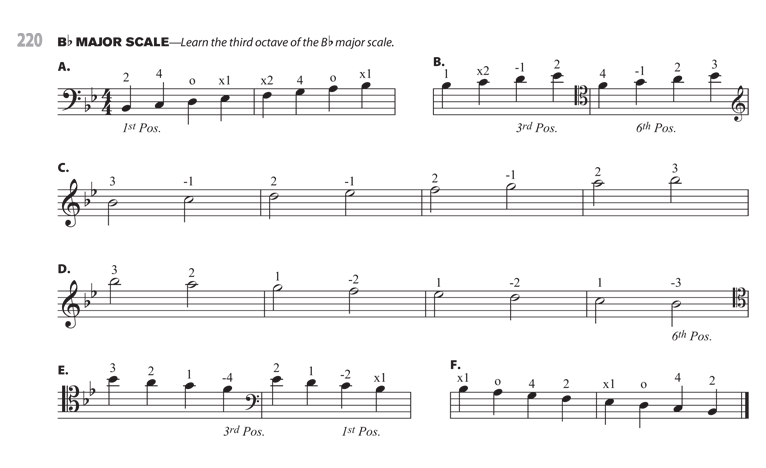 4. The easier 3-octave scales for violin are the harder ones for violas and cellos.

Given that the lowest open string presents the most accessible three-octave scales for each instrument, audition scale requirements do not line up well for heterogeneous string classes. Usually, violins play G and A, while violas and cellos play C and D (not to mention the double basses!). As an initial pedagogical step, match the scale difficulty in a heterogeneous classroom by performing the scale routine at a P5 th interval to equal the open-string starts between violin and viola/cello (e.g., violins start on open G scale while violas and cellos start on open C scale). The resulting perfect interval facilitates additional aural development and gives everyone a comparable level of left-hand difficulty.

As students demonstrate readiness to take on greater left-hand challenges, practice shifting to higher positions through one-string same-finger scales for all. These exercises cultivate careful listening while requiring a well-formed left hand set up. Start with a 3 rd finger scale to keep the left hand balanced throughout the exercise.

An example of a G-major scale on the D-string using 3 rd finger follows for viola. Try one-string same-finger scales with your students to prepare them for more difficult 3-octave scales. Push student aural skills by performing melodic minor as well as major scales in this manner.

Did you hear the joke about a student’s third private lesson on double bass? The parents get really worried when their teenager comes home at 1:00 a.m. A bit nervously the parents ask, "How was the lesson?" The teen replies, "Sorry Mom and Dad. I couldn't make it. I had a gig." Although musical bass lines commonly rely on lower positions and open strings, bass students benefit from shifting to higher positions. Have double bass students extend their technique by playing all 3 octaves of a scale, rather than simplifying material for them. In some ways, climbing the top string on double bass poses fewer challenges than dropping an octave and starting over. In the uppermost octave, players can use repetitive fingering patterns such as 1 2, -1 2, -1 2 3. Plus, the ear training and bow control needed to perform in uppermost positions will pay dividends in sound production and pitch anywhere on the fingerboard.

Once students begin to master the skills for 3-octave scales, their newly developed in-depth listening and focused tone will carry over to performance repertoire. Three-octave scales form a key building block for advanced technique. Sound Innovations: Sound Development for Advanced String Orchestra can help remove hurdles between your students’ playing and a more artistically satisfying performance.

Logical sequence, clean pages, and clear explanations combined with MasterClass videos and varied accompaniments will foster better comprehension and better execution of technique. Emphasize playing with a characteristic beautiful sound with Sound Development and Creative Warm-Up books. Adjust the pacing and focus of your teaching throughout the semester with the new resources at SI Online, plus access the accompaniment tracks and MasterClass streaming videos for Books 1 & 2 in one convenient place. Learn more at alfred.com/si.

Kirk D. Moss, PhD, serves as Dean of the College of Arts & Humanities and Professor and Chair of the Department of Music & Theatre at University of Northwestern. Coauthor of Sound Innovations, he is a past national president of ASTA and has appeared as a conductor, clinician, or adjudicator.